Points to be awarded in this manner: 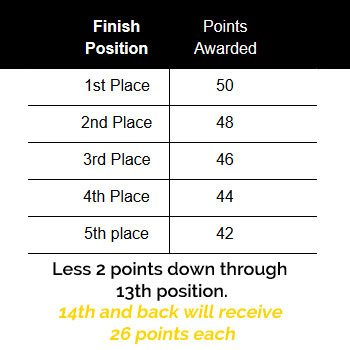 1. A point system will be used with points awarded to all competing member pulling vehicle at all sanctioned events. Pulling vehicles must hook to sled under own power and make an attempt to be eligible for points.

a. Points will be split by the tied placings. Example = Tie for 1st place, 50 points + 48 points/2=49 points awarded to both contestants in the tie. Placing money will be divided the same way.

b. Does not apply to the Farm Stock & Too Hot To Farm in the event of a DQ, only placing points.

3. 15 points —Rainout points for all contestants that are at the pull.

5. Last place money will also be awarded to a pulling vehicle which is forced to scratch out of his/her first weight class due to breakage (money, no points).

6. No points for a class will be awarded unless the entire class is completed.

7. In the event of a points race tie, the pulling vehicles involved will have all their footage distances (in that class) added up for the entire season; the most footage is the points winner for that particular class.

See the official results and highlights from all of the latest ECIPA pulling events.

See the current ECIPA points leaders from each class for the 2019 Season.

Find the next pulling event near you on our 2019 ECIPA schedule.